Pictures from my two recent trips to Paris. On my second one, we stayed in the same District that was hit heavily by the attacks.

So, by now I’m sure that everyone has heard of the terrorism attack that occurred in Paris on November 13th.  Suicide bombs, mass shootings and hostage taking took the lives of 129 people (89 of them at the Bataclan theatre) and hospitalized 352 people (with 80 of those being described as critical).  The Islamic State of Iraq and the Levant (ISIL) has claimed credit for these attacks, and early reports in the chaos reported that Syrian passports had been found on at least one of the attackers (7 have been identified, all are dead).  It should be noted that, at the time of posting this, French officials believe that the Egyptian passport found belonged to a victim of the attacks and that the Syrian passport is most likely a forgery out of Turkey or stolen from a deceased solider.  The individual, they do not believe, was a “refugee terrorist.”  We now know that the attackers were actually French and Belgian natives, including Abdelhamid Abaaoud, the Belgian militant believed to be the organizer of the attacks.

However, in the immediacy of the attack, without that knowledge, a backlash began against Syrians – especially Muslims – and especially against the Western governments recent promises to bring in Syrian refugees to their respective countries.  The United States has made the most news about this issue, as, at the time of posting this, 31 governors (30 Republicans and 1 Democrat) have stated that their states will not take in any of the promised 10,000 Syrian refugees – who are attempting to flee the civil war that is raging in Syria – that USA and the Obama administration have promised to take. 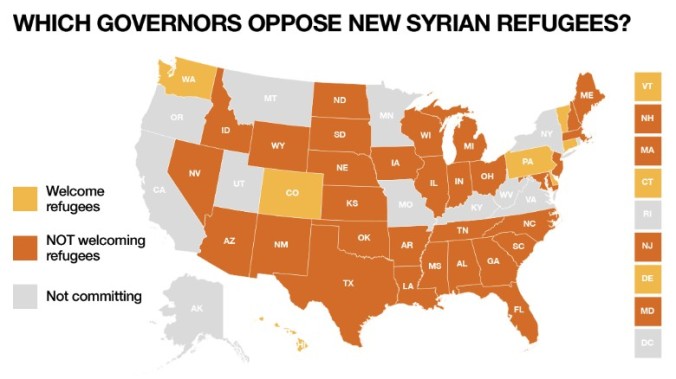 It should be also noted that, at the time of posting this, 15 governors have also pledged that their states will support the placement of Syrian refugees in their states.  Additionally, many mayors in the states whose governors have publicly expressed they will not welcome Syrian refugees have expressed their support for taking in Syrian refugees.  However, the point still stands: more than half of the governors in the United States have made a public announcement against taking in refugees from Syria, and many of the GOP candidates for President have echoed this sentiment.

Now, while the position of individuals not yet elected to an office are interesting in how they reveal a desire to pander to islamophobia and fear mongering, the response of the governors is perhaps more interesting.  Governors, it has been noted, do not have the legal authority to refuse refugees in their respective states.  They can, as that link notes, make it difficult for refugees (cutting funding, etc.) but they have no legal authority to block or stop refugees from being taken into their states.  So, with that knowledge, statements declaring that “X state will not take any Syrian refugees,” become more interesting, because they are also functionally meaningless.  These statements are essentially the same grandstanding and pandering that the GOP candidates are doing, but they are even more troubling, because as stated, although they cannot outright ban refugees, they can make it more difficult.

I’ve read some of the comments on these announcements, and many of them are very supportive of these positions.  Many are not, but the ones that are praise these governors as taking a brave stance against protecting their country.  That any Syrian refugee could be a terrorist, and thus we (Western countries) shouldn’t take any of them.  This of course goes against the fact that “single men of combat age” only represent about 2% of refugees taken in and that no Syrian refugees currently in the USA have been charged with domestic terrorism.

Refugees go through a long process of screening to come to countries like the USA and Canada.  In the USA the process takes 18-24 months in the USA, and involves the “State Department, the Department of Homeland Security, the Defense Department, the National Counterterrorism Center and the Federal Bureau of Investigation.” It has been described by Deputy State Department Spokesman Mark Toner as “the most stringent security process for anyone entering the United States.”  The process is most assuredly not perfect, but even it was, refugees too must travel to these countries on commercial airlines, and any refugee that had terrorist inclinations and didn’t appear on the no fly list would have a much easier time entering the country on a travel visa, and forgoing the screening process and wait time.

So why have these governors and presidential candidates taken the positions they have?  A Bloomberg poll after the attacks found that this was the sentiment of American people on continuing to bring in Syrian refugees: 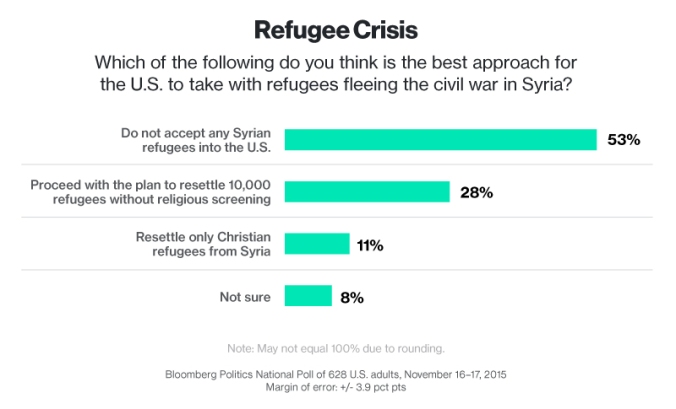 Again, this feeling is likely driven by fear of such an attack happening on American soil, and fear is an understandable response.  America is still very culturally sensitive to terrorism after 9/11, and I can personally understand that. My brothers were 2 blocks away from the World Trade Centre on 9/11 (they slept through it and were fine).  But we worried.  We were afraid, because we couldn’t contact them.  Fear is natural, and even adaptive.  Fear keeps us from doing dangerous things.  A fear of being attacked by bears is helpful in keeping you away from bears, and thus from being attacked by bears.  The problem is when we let fear control or govern our lives, and this is where the response to these attacks by the GOP governors gets problematic.

These governors, in their fear – and perhaps desire to pander to the popular attitude against Muslims in America, or to appear “strong on terrorism” – have let terrorists govern their country.

Terrorism is not just about taking lives.  Terrorists most certainly do aim to kill, but their killing is only a part in their goals.  Terrorism aims to “cause terror” as the name would suggest, and is symbolic: terrorists aim to have an impact that extends beyond the impact of the attack itself.   2,996 people died on 9/11, and their loss was an absolute tragedy, but the impact that those deaths had reached across far beyond their families and personal losses.  9/11 has reshaped our very world, and this too is part of the goals of terrorism.  129 people people died in the recent Paris attacks, and every single one of those deaths is a tragedy, and every single one of those people deserve justice.  But in our grief, fear and anger, we must try our best to not let this event colour our perceptions – of Muslims, of refugees – and make decisions that are little more than grandstanding, and have real potential to harm those who need the most help, as President Obama said: these refugees are often the victims of terrorism themselves.

Personally, I have worked with refugees that have come to Canada through Gateway, a program that provides healthcare to refugees that have just arrived.  Through this program, I have done physical health exams on refugees, and taken histories of their health and their lives, and I have never met nicer people.  The children are just like any children, who can’t wait to play with you, and the adults are so kind, utterly willing and grateful for the help that the student volunteers of the program give them.  And yet, these are also people who have survived things that I cannot even imagine.  Every interview, we have to ask them if they have “Seen or experienced and violence in their home country” and I have yet to receive a negative answer.  These refugees are just people, who have braved years and sometimes even decades in refugee camps for the chance to come to our country and have a chance at a safe life.

One young woman particularly stood out to me.  She was my age, and as I took her history, I couldn’t help but compare the things that she had survived in the same amount of time I had been alive.  This woman had survived things that I can’t even imagine and conceptualize, had spent years in a refugee camp trying to provide the best life for her children, and had finally come to my country to try and give her children a better life than she had.  Who am I – who in the same years as she did lived a life so utterly privileged based on nothing but the fact that I was lucky enough to be born in Canada – to tell her that she cannot live here too, because the fringe element of her country or her religion committed a terrible attack?

Appropriate screening must be done to best protect both refugees and residents of the countries taking in these refugees, and although I think the tract record of the screening has been pretty good so far, some updates or added review might be beneficial.  But reactionary statements like promising to close our boarders to those who need protection and shelter most is not the answer.  We have a responsibility to be better people than those who have committed these hideous attacks, and we have the privileged position to have the opportunity to do something for refugees.

Refugees are people that need our help.