So, everyone has seen this movie right? 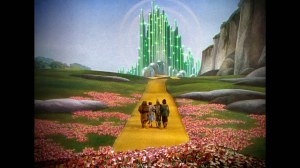 Apologies for getting that song stuck in your head.

If you haven’t, that’s the Wizard of Oz, where, through an interdimensional/incredibly hallucinatory tornado, Dorothy
(and her little dog too!) find themselves in the magical land of Oz.  They meet up with a cast of obvious metaphors, and all of them, to get what they desire most, must go to the Emerald City to find the great and powerful Wizard of Oz, who will grant their greatest wishes.  And, after some accidental witch homicide (but before the intentional witch homicide) they reach the Emerald City and find that this is The Wizard: 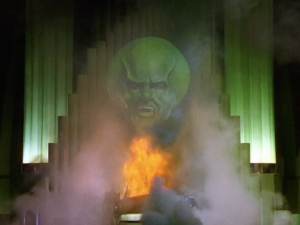 His forehead makes him look like a Klingon in this picture.

A suitably impressive and scary sight, as befitting the Great and Powerful Oz.  But once they commit the intentional witch homicide he asks of them (as an adult, you realize this movie had a lot more murder than you thought as a kid) and return for their promised reward (a way home, courage, a heart, etc 😉 ) they begin to realize that the big scary talking head is stalling, and not exactly putting his money where his mouth is, so to speak.

And then this happens:

They realize that the “Great and Powerful Oz” is nothing but a simple man, unable to grant their wishes with magic.  That this person that they thought was the gateway to their dreams and their greatest wishes is not powerful, or great, but simply a person, as ordinary as they are.

Or yes, I did end up as an interviewer yesterday for the MMI.

Now, I can’t say anything about the interview itself, because professionalism and lawsuits like whoa, but I really wanted to make this post about how the experience felt, after coming out of it on the other side.  Most of you who read this blog are premeds or med students or at least medically inclined, and so I imagine that most of you have some point of reference to that enormousness that is the process of getting into medical school.  And the interview is a huge part of that. You have months to retool and perfect you application, but you’ve only got those 2 hours in the interview to get it right, and the pressure can be overwhelming.

Speaking just from my personal experience, I can remember how nervous I was waiting for the interviews to begin, and how I went into each one, trying to give it 110% percent, trying to impress these people – these gatekeepers to the thing I wanted most – enough that they would find me worthy, would grant my greatest wish.

The interviewers were my Wizard of Oz.

In looking for this gif, I realized that despite being a John Green fan I had apparently missed a huge meme about this one quote.  Kudos to the person who put the algebra book between their teeth 😉

I love experiences where I can see both sides to it, to have those comparing and contrasting perspectives and to really be able to have a fuller picture it really interesting and rewarding for me.  To go behind that curtain, to so speak, and to find out what it feels like to be the Wizard, when you’ve also been Dorothy is an incredible dichotomy, and no where else has that ever been so true than yesterday, acting as an interviewer.  I think this is probably because of how secretive and nontransparent medical school applications processes are, combined with how huge the weight of that interview and that application have on the course of your entire life, but whatever the reason, the differential between being an applicant and an interviewer really hit me harder than it ever has when I’ve had the opportunity to play both roles.

The reason I keep beating this Wizard of Oz metaphor into the ground, is because it really is the best way to explain the feeling. Being an interviewer was like pulling back that curtain and realizing that those people that I saw as so powerful, as the path between me and the rest of my life, were really just people like me.  Just people, who didn’t have all the answers, and who were just doing the best they could to try and help me do as well I could on each station.  All that time we spend agonizing over every word and gesture they make, thinking that every facial twitch spells doom, is just an interviewer trying to stay open but not too positive or negative, or even just them being tired, stiff from sitting in a little box of an office and making themselves try to pay attention to every word you say despite the fact they might have heard the answer 20 times already, because they know you only have 8 minutes and that every minute is so precious to you.  That most of the time they don’t prompt you because you’re doing poorly, but because they are told to, or trying to help lead you in the right direction, or that not prompting you isn’t necessarily a good or bad thing.

Oh, and yes, although I still think prep courses are worth it in terms of organizing your thoughts into a logical flow (a definite problem of mine), you can totally tell which applicants have taken them.  It’s not a bad thing, it’s just really obvious.

I really wanted one of those Nostalgia Critic “I’m acting” gifs, but then I saw Elmo and that was that 😉

Now, of course there is much more than just the actual write ups that each individual interviewer does that determines admission, and that process still remains a real mystery to me. One day, if I ever end up a faculty member when I’m a physician, I’d love to see if I could play a role on an admissions committee, to really see what was behind that metaphorical curtain, but that’s a thought for future me, and another day.  Today, I can say that I thought that being an interviewer was a really interesting and rewarding experience, and that if I have the opportunity to do it next year and the year after (in the city and not on call) then I will certainly jump at the chance.  It was eye opening and perspective shifting yes, but neither of those were bad things, and in fact they only made me more interested in being a part of this process.

It was, however, the most exhausted I had been since perhaps I actually interviewed as an applicant, and that is saying something!

Still, the moral of the Wizard of Oz is that you have within you already the things you thought you lacked – the ability to go home, courage, a heart, a brain – and you only needed to believe in yourself all along, and I think that might be the moral of med school interviews as well.  I can’t tell you how to get into medical school, even after being a part of the interview process on both sides.  All I can say is, if you try your best, if you practice and are informed, empathetic, caring and logical, and have a real passion for medicine, that even in the strange artifice of the MMI, that does come across. And those people, those Wizard’s of Oz sitting three feet from you with their clipboards and their carefully blank faces?  They see it, they really do. 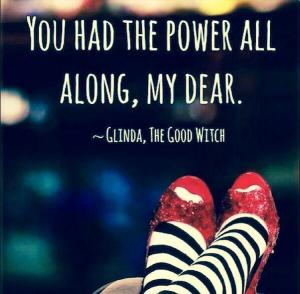 You just have to see it too, and believe.